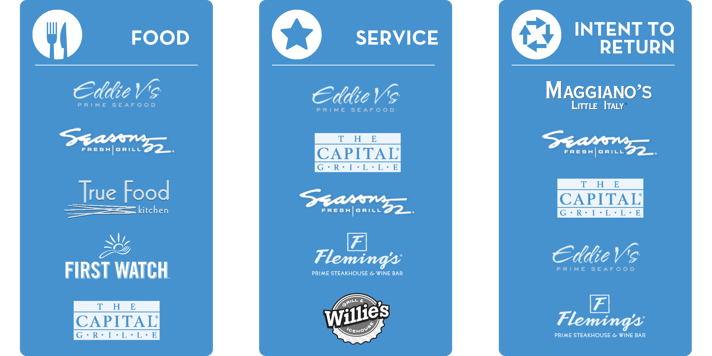 The restaurant industry continues to post growth year over year, but the rate slowed down considerably during March as the industry is starting to lap over a period of accelerated recovery last year. This time last year is when vaccines became more available and another round of stimulus payments helped unleash some pent-up demand. Sales growth was 7.1% during March, compared to 21.2% in February.

Guest counts have not been able to keep up. Traffic growth became negative in March at -1.7%, down from 8.1% the previous month. The rapid rise in average guest check remains a challenge for restaurant guests, as they faced historically high inflation rates during the month. The segments with the largest increase in average check year over year were fast casual and quick service.

A bright spot for restaurants has been improving guest sentiment, which rebounded strongly in Q1 compared to the previous quarter. Food net sentiment* has improved slowly over the last few months. In fact, March 2022 had the strongest food net sentiment since June of last year.

Guest sentiment is improving for restaurant service as well. Even though service net sentiment slipped slightly in March compared to the previous two months, the first three months of 2022 restaurants posted the strongest service sentiment since November of 2020.

Connecting the Dots on Performance

The first quarter of 2022 was tough for the restaurant industry from a sales and traffic growth perspective relative to previous quarters. However, some brands continue to thrive in this environment and are experiencing significantly better results than the rest. Full-service restaurant companies in the top quartile of sales growth performance achieved sales growth in Q1 that was almost 17 percentage points higher than the median growth experienced by the rest of the industry. Limited-service brands in the top half of sales performance had sales growth 11 percentage points better than those in the bottom half.

What attributes of the restaurant experience did these top-performing brands excel at the most in differentiating themselves from the rest of their competitors? The results were consistent. For both full-service and limited-service brands, the biggest differences in guest sentiment were driven by service and beverage sentiment.

Other factors are important to a restaurant’s success, but frequently it all comes down to execution at the unit level, driven by staff providing a perceptibly better experience to their guests in a few key areas. For the first three months of 2022, those key areas were service and beverages.

In the case of full-service brands, top performers based on sales growth had service net sentiment that was 20 points better than the rest of brands. They are providing a superior guest experience from a service standpoint, and their guests perceive the difference and talk about it online. But interestingly, more than food, the area in which they separated themselves the most after service was on beverage sentiment. The norm is still for beverage sales growth to be negative relative to the pre-pandemic days, but top performing brands are growing their alcohol sales and part of their success is through meeting and exceeding guest expectations in this area.

For limited-service restaurants, the gap in sentiment between those in the top half of sales performance and those in the bottom are much smaller and guest sentiment tends to be lower overall. But guests of those top performing brands rated their beverages more positively by 5 points, while their service had net sentiment 3 points higher than for those with weaker sales growth.

Orlando remains the undisputed leader in most positive restaurant sentiment among the 25 largest markets in the country. This DMA led in guest sentiment based on food, beverage, service, ambiance and value. The only attribute led by another market was Houston, which had the highest guest sentiment based on restaurant intent to return. Besides Orlando, the markets with the most positive net sentiment during the month based on restaurant food were Tampa, Detroit, Indianapolis and Houston. Tampa, Philadelphia, Houston and Raleigh were also among the top performing based on strongest service sentiment in March.

On the contrary, two markets had the least satisfied restaurant guests during the month. San Francisco, which has struggled with low guest sentiment in recent months, was the major market with lowest guest sentiment for restaurant food, service, value and intent to return. Charlotte had the lowest net sentiment based on beverages and ambiance. Other major markets in the west coast also struggled with restaurant food and service sentiment during March; among the DMAs with lowest net sentiment based on these especially important attributes of the restaurant experience were Sacramento, Los Angeles and Seattle.

The Restaurant Guest Satisfaction Snapshot (RGSS) is produced by data from Black Box Guest Intelligence™. Guest Intelligence is tracking over 190 brands to benchmark customer satisfaction and is the only online tool that integrates with operational performance data to validate the impact on financial performance. The data set focuses on six key attributes of the restaurant industry experience: food, service, ambiance, beverage, value and intent to return.

The RGSS algorithm determines the highest ranking brands based on sentiment. Brands included in this monthly snapshot must have a total of at least 250 mentions for the month. Restaurants must have a minimum number of units to be eligible as well. DMA rankings consider only the largest 25 areas.

How to Increase Guest Traffic to Your Restaurant

Restaurant Insights And Data Straight To Your Inbox!

Sign up for our Restaurant Industry Performance Pulse to receive weekly trends and insights affecting the restaurant industry!

Don’t spend any more time making decisions without robust data. You’re just a few clicks away from endless possibilities in benchmarking your results against your competitors. Speak to a product expert!

Black Box Intelligence™ is the leading performance benchmarking provider for the restaurant industry connecting the dots on people, profits and performance. Their unparalleled data set reveals insight into financial, workforce, guest and consumer trends from over 300 brands and 87,000 restaurant units. Black Box Intelligence is also the producer of The Best Practices Conference held annually in Dallas, Texas.